From the 1950s through the 1980s, military, civilian contractors, other employees and their families stationed at Camp Lejeune Marine Corps base in North Carolina were provided tainted drinking water containing poisonous levels of industrial chemicals. Studies conducted have confirmed that the exposure of these toxic elements can cause birth defects, miscarriages, infertility, cancer, and other diseases.

In the 1980s, environmental regulations forced the Marine Corps to further test their water supply systems at Camp Lejeune, which showed the water was flooded with toxic chemicals – Trichloroethylene (TCE), Perchloroethylene (PCE), and benzene. These highly toxic chemicals were in the water for on-base family housing, barracks, administrative offices, the base hospital, and schools. To further put this into perspective, the water supply on base was often a thousand times higher than what the EPA maximum safety standards. 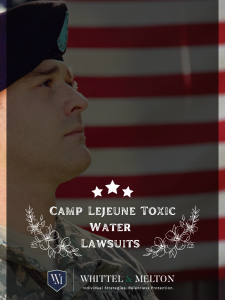 Once the water contamination issue was discovered, the USMC ignored the issue and continued to allow residents and workers consume the contaminated water. In 1987, the facility was finally shut down. From 1953 to 1987, it is estimated that 750,000 to 1,000,000 people consumed the toxic water at Camp Lejeune over the 35-year period.

A strict law in North Carolina originally prevented any victims who suffered illness and other side effects from the contaminated water from pursuing justice. Congress is now on the verge of providing victims who lived or served on the base between 1953 and 1987 to finally file lawsuits and obtain financial compensation for their suffering through the Camp Lejeune Justice Act.

Those who are exposed to TCE, PCE, and benzene are at risk for developing various cancers, including:

In addition to cancer, there are other diseases that have been linked to TCE and PCE exposure, including:

Congress is very close to enacting a new federal law that will allow victims and their families to finally recover financial compensation for their losses over the years. The Camp Lejeune Justice Act is a part of a larger bill called the Honoring Our Pact Act (PACT Act). When this becomes law (should be within the next few days/by the end of summer), family members of those who have died after living or working at Camp Lejeune as well as those who are still alive and suffering from ailments linked to the water contamination on base will be able to file personal injury and wrongful death lawsuits against the federal government. These lawsuits can be brought even if the person passed away decades ago.

Our Camp Lejeune Lawyers at Whittel & Melton will be posting more information about the Camp Lejeune Justice Act as things get finalized. Currently, you can contact us and tell us your story and we can start working on your claim and making sure it is filed in a timely manner. Once claims can be brought forth, they will likely be grouped together in a class action suit in North Carolina for all victims residing anywhere in the U.S.

Who is Eligible for Compensation?

If an immediate family member passed away prematurely as a result of the water contamination at Camp Lejeune, then you may be eligible to file a wrongful death claim and recover financial compensation. If you or a family member was stationed at Camp Lejeune in North Carolina between 1957 and 1987, and you lived or worked on base for at least 30 days, and then suffered an illness or injury that you think is a direct link to toxic water, then we strongly recommend that you contact us to find out if you are eligible for financial compensation. Likewise, all former or present military or civilian, as well as their families, are eligible.

Our Camp Lejeune Lawyers at Whittel & Melton want to help you achieve some sense of justice from this terrible tragedy at Camp Lejeune. If you lived or worked on the base and were diagnosed with cancer or any other serious side effects, then we welcome you to call us at 866-608-5529 or contact us online to request a free consultation. We are available 24/7 to speak with you and will never charge you any fees to speak with us regarding your potential claim.