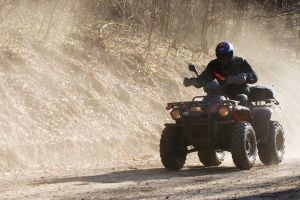 Mims, Florida – Three teen boys were injured in an ATV crash Saturday afternoon in Brevard County after apparently crashing into each other on a road in Mims.

The boys, ages 14 and 17, were airlifted to a nearby hospital. One of the boys was thrown from the all-terrain vehicle during the collision.

Updated information on the boys’ condition is not available at this time.

The trio was issued a ticket for driving illegally on a public road. Two were also cited for careless driving and the youngest boy was ticketed for not wearing a helmet.

According to the Consumer Product Safety Commission, ATV accidents caused 115,000 injuries and contributed to more than 300 deaths in 2010. While ATVs and 4-wheelers can be exciting forms of transportation, they place drivers and passengers at an increased risk for severe injuries and even death. After an ATV accident takes place on a public road or in a rural area, a thorough investigation must be conducted to preserve critical evidence. Determining the exact cause of your accident may help you recover the compensation you need to move on from severe injuries, including:

• Head Injuries
• Spinal Cord Injuries
• Broken Bones
• Paralysis
• Amputation
• Neck and Back Injuries
• Scars and Disfigurement
Many of the ATV accidents that occur throughout the U.S. each year involve adults over the age of 18, but in the last 10 years the number of children and teens killed in ATV crashes has increased by 88 percent. Statistics compiled by the CPSC show that while children under the age of 16 only make up 15 percent of all ATV riders, they have accounted for 27 percent of ATV injuries and 28 percent of ATV-related deaths. Many of these accidents and injuries are caused by other motorists, riders failing to wear proper safety equipment and even negligent manufacturers.

If someone else’s carelessness or recklessness led to your ATV accident injuries, you may be able to seek compensation for damages, including medical treatment, rehabilitation, lost wages and pain and suffering. The Florida Injury Attorneys at Whittel & Melton can launch an investigation immediately following an accident in order to uncover any valuable pieces of evidence and identify any eyewitnesses to the crash.

If you were injured or someone close to you was killed in an ATV accident anywhere in the state of Florida, contact the Florida Injury Attorneys at Whittel & Melton online or dial us statewide and toll-free at 1-866-608-5LAW (5529).