Former Cardinal Theodore McCarrick, 91, has been accused of sexually assaulting a teen boy in Massachusetts in June of 1974, making him the highest ranking church official to face charges of this nature.

He was charged Wednesday with three counts of indecent assault and battery on a child over the age of 14 in Dedham District Court by the Wellesley Police Department. This is his first criminal charge since he has been accused of abusing seminary students in New Jersey years ago.

The charges stem from an incident at a wedding in June 1974 in Wellesley, Massachusetts.

According to records, the accuser was 16 at the time of the incident and was also abused at other locations in Massachusetts and in other states, including New Jersey.

McCarrick ranked among powerful officials in the Catholic Church for decades until he was removed from ministry in 2018 after the church found abuse allegations against him to hold merit. He was defrocked a year later following accusations that he abused children and adult seminary students.

While the man has been sued several times by men in New York and New Jersey who claim he abused them as children, the statute of limitations has kept authorities from proceeding with any criminal charges. 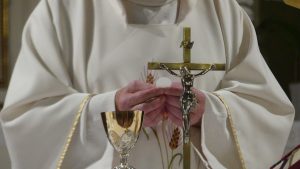 But now, under Massachusetts law, the statute of limitations would have been suspended when McCarrick, who worked in the New York Archdiocese at the time, left the state after the wedding.

McCarrick was the bishop of Metuchen in the 1980s and the Archbishop of Newark from 1987 to 2000. He was then promoted to be head of the Washington, D.C., Archdiocese even though Pope John Paul II was investigating allegations against McCarrick for abusing adult seminary students at a New Jersey shore home for many years.

A Vatican report issued last year alleged that several New Jersey bishops lied in letters to the pope about what they knew about sexual abuse allegations against McCarrick, which helped him have his promotion approved.

McCarrick is accused of abusing children in other pending lawsuits that were filed in New Jersey under a law that suspended the civil statute of limitations on sex abuse complaints for two years, starting Dec. 1, 2019.

McCarrick is currently residing at the St. John Vianney Renewal Center in Dittmer, Missouri, a home for clerics who have committed sexual abuse and other troubled priests, according to reports. Missouri records apparently show that eight registered sex offenders, including two from New York, live at that address.

If you or your son, daughter, stepchild, niece, nephew, or grandchild were sexually abused by a member of the Catholic church, then you may be able to pursue a lawsuit against the perpetrator of the abuse as well as the Church itself. The diocese has an obligation to keep children and others safe from their employers and should conduct a background check on its employees to make sure that priests and other employees are cleared to be around children. Likewise, any allegations made against priests or other employees should be investigated thoroughly to prevent further sex abuse complaints. If the diocese failed to conduct a background check or knew that a priest had a history of child sex abuse complaints against them or had any other indications that raised any red flags, then they can be held liable for their negligence.

If your child was an abuse victim of the Catholic Church, then our Florida Clergy Sexual Abuse Lawyers at Whittel & Melton want tpo help you seek justice by helping you recover financial compensation for all of your losses, such as pain and suffering, emotional distress, loss of religious faith and enjoyment of life, as well as the cost of therapy and treatment. You may also be entitled to punitive damages. We strongly urge you to not wait any longer and call us today to discuss your church sex abuse case – 866-608-5529 or contact us online. We will answer all of your questions and discuss your legal options with you in a completely free consultation.