A wrongful death lawsuit has been filed claiming that Bethune-Cookman University failed to put a stop to fraternity hazing that ultimately resulted in the death of a sophomore student and Marching Wildcat band member.

The sophomore attending Bethune-Cookman University on a marching band scholarship died in February 2012 after the car he was riding in smashed into a utility pole in Daytona Beach.

In a lawsuit filed in Volusia County Circuit Court, the student’s mother alleges that hazing by members of her son’s fraternity led to sleep deprivation in not only her son, but the car’s driver and other pledges.

The lawsuit states that the car’s driver fell asleep, which is what led to the tragic collision. Everyone else riding in the car survived the crash.

According to the lawsuit, the university and the then-coordinator of Greek Life “had direct knowledge of previous hazing activities occurring in student groups affiliated with BCU, including (the) fraternity, and did little or nothing to discipline the activity, thus sending a message to students that the anti-hazing policy was not enforced by the university.” 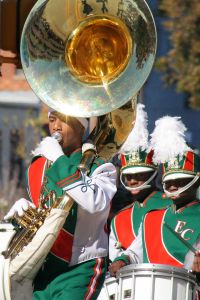 The vice president who heads the department over students and student organizations did release this statement: “Bethune-Cookman University prides ourselves on having a zero tolerance on hazing and put mechanisms in place to ensure that doesn’t happen and if it does we address it to the fullest.”

University officials did say the fraternity is not associated with the marching band, however many band members belong to the group.

The lawsuit alleges that hazing took place both on and off campus, and required pledges to stay up all night to study fraternity history and facts.

According to reports, the night before the crash, the deceased and four other pledges stayed up until 4 a.m. memorizing fraternity facts “in fear of what would happen if they did not memorize accurately.”

It is also alleged that at 4:30 a.m., another fraternity member called the five pledges over to his apartment for a quiz, keeping them there until 8 a.m.

When the pledges were permitted to leave, they fell asleep as they drove home and crashed into the utility pole.

According to court documents, the fraternity’s attorney dismissed that any responsibility be put on the organization for the student’s death, stating that, “Students have been staying up all night to study last minute for quizzes and exams since quizzes and exams have existed.”

Regardless of potentially deadly consequences, the problem of hazing at college universities is still lingering. In fact, according to a study conducted by the University of Maine, around 55 percent of college students partaking in clubs, organizations and athletic teams have experienced some form of hazing. If your loved one’s death was caused by hazing, a Florida Wrongful Death Attorney at Whittel & Melton can make sure you recover the just compensation you deserve. We urge you to contact us today online or call us statewide and toll-free at 866-608-5529 to receive a free case evaluation.