San Juan, Puerto Rico – A wave of illness, suspected of being a norovirus, swept across the cruise line that operates the Queen Mary 2 last month, causing 201 passengers to fall ill.

According to a spokeswoman for Cunard Line, the owner of the ship, the gastrointestinal illness outbreak subsided as the ship headed back into port, leaving just two passengers affected at the voyage’s end.

Those sickened were asked to “isolate themselves in their cabin until non-contagious.” The cruise line told ill passengers that any shore excursion costs would be refunded.

The Queen Mary 2, with 2,613 passengers and 1,255 crew members, was docked in Saint Lucia in the Caribbean when the outbreak was reported to the Centers for Disease Control and Prevention. Vessels are required to notify the agency when at least 2 percent of those on board develop a gastrointestinal illness.

The crew of the Queen Mary 2 claims they took steps to stop the spread of the virus, such as deploying teams to do additional cleaning of public areas with disinfectant.

According to the CDC, norovirus can be acquired from an infected person, contaminated water or food or even by touching contaminated surfaces containing the contagious microorganism. Norovirus causes acute gastroentitis, producing severe stomach pain, nausea, vomiting and diarrhea. This particular disease causes around 21 million illnesses a year, and an estimated 70,000 cases require patients to be hospitalized. The illness kills around 800 people a year, according to the CDC. 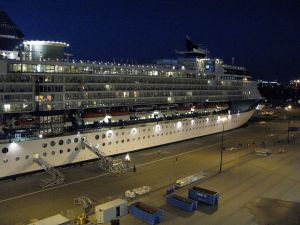 The Queen Mary 2 received a score of 100% on their most recent inspection by The Vessel Sanitation Program, which is a part of the Centers for Disease Control and Prevention. However, just because a cruise ship passes as being clean, this does not mean you cannot get sick while on board. Illnesses on cruise lines is not a new concern, rather it is a problem that comes up quite frequently despite active measures to prevent the problem. The following are some of the most common causes of illnesses on cruise lines:

• Potable water systems
• Food storage and preparation
• Pest control
• Jacuzzi and swimming pool maintenance
When people fall ill or are injured aboard a cruise ship, they are often confused and unsure about their rights. A Florida Cruise Ship Injury Attorney at Whittel & Melton understands the technicalities of cruise ship injury claims and can help you recover compensation for damages. If your vacation was cut short by an illness or unfortunate injury, we can help you recover the costs of medical bills, pain and suffering and other costs associated with the illness or accident.

It is important to understand that cruise ship injury claims are generally governed by the terms on the back of your ticket. There is usually a limited window of time for you to file a claim, sometimes as little as six months. This means that you must take action fast when it comes to a cruise ship injury or illness. A Florida Cruise Ship Passenger Injury Lawyer at Whittel & Melton can make sure your case is handled correctly and filed in the appropriate amount of time. For a free initial consultation of your claim, contact us today online or call us statewide and toll-free at 866-608-5529.