A patron of McDonald’s is suing the fast food giant after an incident in which his orange juice allegedly came with a plastic spear instead of a straw, which lodged itself in his throat.

According to reports, when the man attempted to extract the object from his mouth, a serrated spear deployed and shot itself into his esophagus. After he managed to remove the spear, the man claims he suffered severe injury to his throat.

The spear in question, is believed to be a part of the OJ machine. However, orange juice should not be served with bits and pieces of machinery floating in it, so the man has joined the many people who sue for foreign objects in their food and beverages. 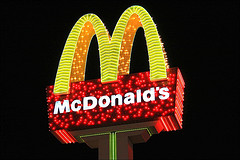 This is certainly not the first case of something odd turning up in a person’s drink. Recently, a 67-year-old Utah woman was burned from the inside by iced tea that was accidentally served to her with caustic lye instead of sugar. In cases like these, the restaurant that served the food or beverage can be held responsible for the injury caused by the hazardous substance in the food or drink.

For this specific case, the man will likely claim that McDonald’s was negligent for allowing a piece of the OJ machine to be served with his OJ. Due to the fact that orange juice does not typically contain sharp plastic instruments, McDonald’s will most likely be found negligent. The man could also argue that McDonald’s violated its implied warranty to only serve food and drinks that are safe for human consumption.

One fact that is not mentioned in the report that could be crucial to the outcome of this lawsuit is when the man filed his claim. The Statute of Limitations could bar the man from seeking damages against McDonald’s since his injury happened more than two years ago. In New York, the time limit to file a personal injury claim is three years. A lawsuit filed after the deadline set by the NY statutes can be dismissed by the court unless a judge sees it fit to allow for the tolling, or extension, of the deadline.

If the man has missed the cutoff date to file, he may have difficulty obtaining financial compensation.

Because of the time constraints imposed by the statute of limitations, it is very important to not delay in getting legal help from a personal injury lawyer when it comes to your potential injury claim. A New York Injury Lawyer at Whittel & Melton can see your personal injury lawsuit through to its completion. If you have a question about a potential claim or the statute of limitations for your case, please call us statewide and toll-free at 866-608-5529 or contact us today online.