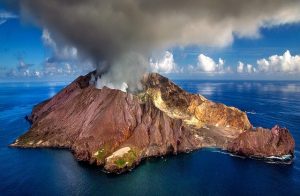 A volcano erupted Monday on a small New Zealand island frequented by tourists, leaving at least five people dead and others injured, some of whom were members of a tour group from the Royal Caribbean cruise ship “Ovation of the Seas.”

The eruption sent a large plume of steam and ash into the sky around 2 p.m. local time on White Island.

Police said they believed there were fewer than 50 people present at the time of the eruption on the volcanic island, but at least five were confirmed killed.

There are a number of people on the island who are unaccounted for, however. Both New Zealanders and overseas tourists are believed to be involved.

At least 10 people were said to be unaccounted for, and police said in a later statement that after conducting overflights, that they do not believe there are any survivors on the island.

According to reports, police are “working urgently to confirm the exact number of those who have died, further to the five confirmed deceased already.”

At least some of those injured and missing were members of a tour group from the Royal Caribbean cruise ship “Ovation of the Seas,” the police confirmed. The number of cruise passengers affected and their nationalities were not clear, but the Florida-based cruise line confirmed in a statement to CBS News that “a number of our guests were touring the island.”

Australian Prime Minister Scott Morrison said 24 of the cruise passengers who were visiting the island were from his country.

Royal Caribbean said its ship Ovation of the Seas would remain docked “as long as needed to assist with the situation.”

St. John medical responders said in a statement they believed there were 20 people on the island who were injured and in need of medical treatment. It said it had dispatched seven helicopters to the island with paramedics aboard.

White Island, also known by its indigenous Maori name, Whakaari, sits about 30 miles offshore of mainland New Zealand, northeast of the town of Tauranga on North Island, one of New Zealand’s two main islands. Police were asking people to avoid areas on the North Island that were close to the eruption, including the Whakatane Heads and Muriwai Drive areas.

The island became a private scenic reserve in 1953, and daily tours allow more than 10,000 people to visit the volcano every year.

A volcanologist with GNS Science said the eruption was significant and sent a plume of steam and ash about 12,000 feet into the air. He said it had affected the whole of the White Island crater floor.

The GeoNet agency at first raised its alert level to four, on a scale where five represents a major eruption. It later dropped the alert level back down to three because the eruption wasn’t sustained beyond the initial blast.

There will be questions asked as to why tourists were still able to visit the island after scientists recently noted an uptick in volcanic activity. GeoNet monitoring cameras captured images of tourists walking around the crater of the volcano moments before the eruption on Friday, but the organization later said it had removed the video clips from its website, at least while rescue efforts remained underway.

GeoNet raised the alert level on White Island from one to two on Nov. 18, noting an increase in the amount of sulfur dioxide gas, which originates from magma deep in the volcano. It also said at the time that over the previous weeks, the volcanic tremor had increased from weak to moderate strength.

Cruise ship excursions can be one of the most fun and enjoyable aspects of partaking in a cruise experience. Most people that take cruises are looking for an adventurous way to explore different parts of the world, and exploring different attractions off the boat are the best opportunity for passengers to do so. However, as this tragedy shows, some aspects of cruise ship excursions can result in serious injuries and deaths to passengers.

Cruise ship excursion injuries can be quite serious. If you have been the victim of an injury, or have lost a loved one during a cruise ship excursion, our Florida Cruise Ship Injury and Wrongful Death Attorneys at Whittel & Melton can investigate your case and hold cruise lines accountable for passenger injuries and deaths when applicable.

If you have been injured during a cruise ship excursion, or if you have lost a loved one on a cruise, you may be entitled to file a claim for financial compensation for the damages you have suffered. We are her to discuss your specific circumstances and help you understand all of your rights and options under the law in this situation.