Four women came forward on Feb. 15 and accused a Provo, Utah obstetrics and gynecology specialist of sexual battery, sexual assault and intentional infliction of emotional distress. To date, that number has expanded to 83 women.

A lawsuit has been filed in 4th District Court calling out hospitals in the area, including Intermountain Healthcare (Utah Valley Hospital) and MountainStar Healthcare (Timpanogos Regional Hospital, claiming these facilities allowed the doctor to continue treating some patients.

The hospitals and medical facilities have all filed motions to dismiss the case, claiming that the claims involve issues related to medical malpractice and that the pre-litigation procedures were incorrect for a malpractice lawsuit.

Lawyers for the women have opted for a jury trial and have noted in court documents the differences between medical malpractice and sexual abuse.

The lawsuit alleges that the doctor sexually abused patients for over 40 years and disguised this behavior as medical care.

The American Medical Association’s (AMA) sets forth what is known as the Principles of Medical Ethics, requiring doctors and medical providers to provide sound medical care that respects that rights and dignity of all humans. With that said, doctors sexual abusing patients is one of the most common acts of misconduct that results in disciplinary action by state medical boards. 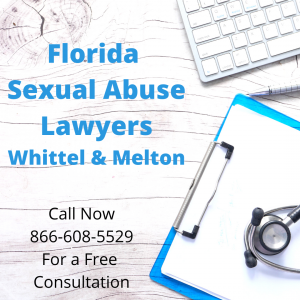 Sexual abuse does not just mean having sex with patients. This can actually be various actions, such as taking nude pictures of patients, sodomy, rape, unwelcome fondling or touching, digital penetration, masturbating in the presence of patients, etc. In the majority of cases that our Florida Sexual Abuse Lawyers at Whittel & Melton have seen, most medical doctors and the facilities where they practice create a cover story to allow for the sexual abuse to continue, including that the abuse is part of a legitimate medical procedure. Our Sex Abuse Injury Lawyers know that this behavior is 100% unacceptable and a betrayal of trust that can cause irreparable damage.

The aftermath of sexual abuse can be depression, shame, guilt, attempts of suicide, the development of eating disorders, anxiety, insomnia, alcoholism, drug addiction, post-traumatic stress disorder, relationship problems, sexual problems, and more. The betrayal by a doctor to a patient can be severe enough to keep patients from seeking treatment for medical issues, which is something that can last a lifetime.

If you were harmed by a doctor or other medical provider during a medical procedure or appointment, our Florida Sexual Abuse Lawyers at Whittel & Melton can help. We want to be the advocate you need to make sure that you recover justice and financial compensation for your physical, emotional, and mental injuries incurred as a result of the sexual abuse. Call us now at 866-608-5529 or contact us online for a free consultation.