In the first three months of 2022, more than 9,500 people were killed in traffic fatalities — a figure that shows this is the deadliest start to a year in the U.S. in two decades.

In seven states and the District of Columbia, officials estimated that traffic fatalities increased by at least 50%. As a nation, deaths jumped up 7% when compared to the same time period as 2021.

Officials have stated that the rise in traffic deaths started in 2020 when the pandemic began, but the problem has continued causing the number of deaths to keep moving in the wrong direction.

Experts have been grappling with what is causing the spike in traffic deaths, but have pointed out that traffic patterns changed during the pandemic, so there is less congestion and more speeding. There is also evidence that more drivers are partaking in risky behaviors behind the wheel, such as not wearing seat belts and driving impaired. 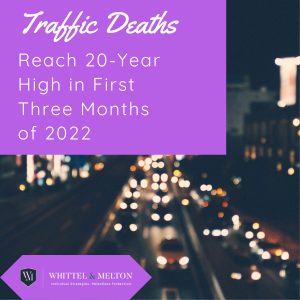 Experts saw traffic deaths spike in march 2020 when the pandemic hit and risky behaviors surged. This trend was something they hoped would dwindle, but the numbers do not lie.

Experts have said that the first quarter of the year is consistently the least deadly on roads across the U.S.

Earlier this year, Transportation Secretary Pete Buttigieg, said that an effort to make the roads safer would be developed focusing road designs and individual driver behaviors. This effort will be supported by billions of dollars in infrastructure law, including a $5 billion fund that will go to grants for cities and towns across the country to keep pedestrians and bicyclists safe on the roads.

The infrastructure law also includes mandates for technology aimed at addressing the top causes of traffic deaths, including breath monitoring devices for alcohol in new cars. This system is in testing with the NHTSA, but any mandates are years away.

Another cause of this surge in traffic fatalities can be attributed to longer morning and evening commutes. NHTSA reports show that Americans drove more than 750 billion miles between January and March during the first three months of 2022, an increase of more than 5 percent compared with 2021.

The NHTSA also noted that the death rate on U.S. roads during the first three months of this year was 1.27 per 100 million miles driven, which is also a higher number than last year.

Florida is consistently ranked as one of the top spots in the nation for traffic-related deaths. The state has a high number of auto collisions, pedestrian crashes, and bicycle crashes. According to Florida transportation officials, on average, eight people are killed and 49 people are injured in traffic accidents throughout the state every day.

With numbers so high, it is very important to remember the rules of the road, so that you and others sharing Florida roadways can stay safe. It is estimated that 90% of car accidents are caused by human error, so it is wise to make good decisions when you are behind the wheel so that everyone can get to and from their destination safely. It is always in your best interest to follow the speed limit, minimize your aggressions against other drivers or pedestrians/bicyclists, refrain from driving under the influence of drugs or alcohol, and avoid distractions like using your cell phone, applying makeup, fiddling with your GPS or radio dials, or eating while driving.

Our Florida Car Accident Lawyers at Whittel & Melton know that all motor vehicle accidents cannot be avoided. If you or a loved one has been involved in a crash caused by the negligence or recklessness of another motorist, we can help. Call us today statewide at 866-608-5529 or contact us online. We can offer you a free consultation and begin helping with your potential case right away.