A 4-year-old child died Monday after being found unresponsive in a swimming pool on a Norwegian Cruise Line ship off the North Carolina coast.

A 6-year-old boy was also found in the pool Monday morning, but a medical team was able to revive the boy and he was flown to a hospital. 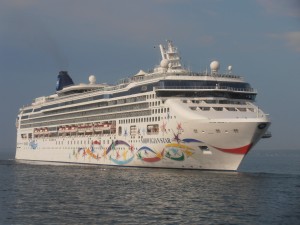 A 4-year-old child died Monday after being found unresponsive in a swimming pool on a Norwegian Cruise Line ship. A 6-year-old boy was also found in the swimming pool and was airlifted to a hospital by helicopter.

A Marine helicopter flew to the Norwegian Breakaway about 40 miles off Cape Lookout to pick up the 6-year-old child. The helicopter flew the boy and his grandmother to the hospital. There is no word yet on the child’s condition.

The cruise line claims that a medical team on the ship performed CPR on the two children, but the younger child died. No additional information has been released from the cruise line.

The 4,000-passenger ship is based in New York and was travelling to Florida.

Drowning accidents can happen in a matter of minutes and with little to no warning. Children who are submerged under water start to lose consciousness after approximately two minutes. Brain injury tends to occur after a child has been under water between four and six minutes. Children that survive near drowning accidents without any neurological damage are usually found within two minutes of being underwater. In most cases, drowning fatalities occur after a victim has been left under water for more than 10 minutes.

Even if a child does survive a near drowning accident, they can still be left to suffer lifelong consequences, including permanent brain damage. Once a child has been submerged between four and six minutes, sadly, the damage done to the brain is usually irreparable.

Cruise ship passengers expect to be taken care of while on vacation, as they should be. As soon as travelers set foot aboard a cruise ship their lives are placed in the hands of crew members, who may not be trained to handle unexpected emergencies. The reality is cruise ships can be very dangerous vessels, and a tragic accident can happen in the blink of an eye.

Drowning and near-drowning accidents are not uncommon aboard cruise ships. These accidents can happen to anyone, regardless of swimming skills or age. However, cruise lines tend to try and limit their liability when it comes to unfortunate accidents, and that includes when a passenger drowns. If someone you love has been seriously injured or killed in a near drowning or drowning accident while travelling on a cruise ship, a Florida Cruise Ship Injury & Maritime Attorney at Whittel & Melton can help you hold the responsible party accountable for their actions. We will work relentlessly to see to it that your rights are protected and that you are justly compensated for your losses. Please call us today statewide and toll-free at 866-608-5529 or fill out a free online case evaluation form by downloading our free app from the Apple App Store or get it on Google Play.