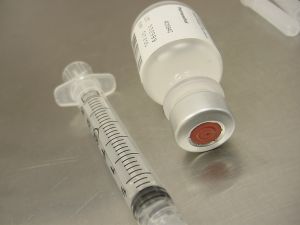 A 70-year-old Marion County man passed away in July after receiving a steroid injection from Florida Pain Clinic in Ocala, Florida. According to the Florida Department of Health, a deadly fungal meningitis outbreak is to blame.

The total number of cases in Florida involving the fungus-contaminated steroid shots is now at six. All of those infected in Florida are from Marion County. The other five patients are undergoing treatment for fungal meningitis after receiving their injections from Marion Pain Management Center in Ocala.

Nationwide, there have been 11 deaths and 119 confirmed cases of fungal meningitis.
Investigators believe that as many as 13,000 people may have received the contaminated injections nationwide. At least 1,100 people in Florida could be affected by the now recalled steroid.

The FDA and the CDC claim the tainted doses of methylprednisolone acetate were made at the New England Compounding Center (NECC) in Massachusetts.
The pharmacy apparently distributed 17,000 vials of the contaminated medication as early as May.

While fungal meningitis is not contagious it can be very hard to treat and extremely lethal.

BE ADVISED – Potentially tainted medications were received by the following facilities in Ocala, Florida:

FLORIDA PAIN CLINIC – 3241 Southwest 34th Street Ocala, FL 34474
MARION PAIN MANAGEMENT CENTER – 1737 Southeast 28th Loop Ocala, FL 34471
SURGERY CENTER OF OCALA – 3241 Southwest 34th Street Ocala, FL 34474
According to the FDA, the NECC has voluntarily shut down its facility and handed over their license. All NECC products have been recalled as a safety precaution. The potentially tainted injections were given starting May 21, 2012. It is important to understand that not all patients that received these shots will fall ill. Symptoms that should cause patients to seek medical care immediately include fever, severe headaches, sensitivity to light, numbness, weakness, neck stiffness and pain, swelling or redness of injection site.

Florida law provides those who have been injured by a medication that was manufactured defectively with the right to seek compensation for damages through a personal injury claim. When distributors and manufacturers of medications fail to make sure their products are safe and free of any dangerous side effects before they are sent out for use, this is considered negligent. Injury victims may be able to seek the following damages from pharmaceutical companies:

• Medical Expenses
• Lost Wages
• Physical Pain and Suffering
• Physical Impairment
• Mental Anguish
If a patient should die due to a defective medication or medical product, the family of the victim may file a wrongful death suit to obtain damages.

If you or someone you love developed fungal meningitis after receiving steroid injections in Ocala, contact the Ocala Meningitis Outbreak Lawyers at Whittel & Melton online or call 352-369-5334.