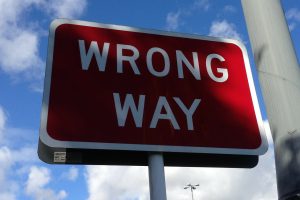 The Florida Highway Patrol has confirmed that a man was killed in a wrong way collision early Saturday morning.

The scene of the accident was along E. Irlo Bronson Memorial Highway.

The incident report documented that the 28-year-old Davenport man was driving a sedan heading west in the eastbound lanes of U.S. 192 near Crabgrass Road at approximately 3:20 a.m. His vehicle smashed into another car that was heading east, according to reports.

The man identified as the wrong way driver was pronounced dead at the scene. The other motorist, a 21-year-old man, and his male passenger, 23, both suffered serious injuries.

Another driver sharing the road at the same time of the crash said she had to swerve off the road to avoid hitting the two men who were climbing out of the car.

A truck driver stopped to help pull the men from the wreckage.

The report did mention that all three of the men were wearing seatbelts, but no further information on the crash is available.

The U.S. Department of Transportation Federal Highway Administration estimates that wrong way collisions result in 300 to 400 deaths annually across the U.S. This number only represents 1 percent of traffic fatalities every year, but the fact that most of these accidents result in head-on collisions at very fast speeds, they are usually more severe than other types of car crashes.

According to the Florida Highway Safety and Motor Vehicles (FLHSMV) 2020 Crash Dashboard (which is considered preliminary data), Florida has already seen 176,317 motor vehicle crashes from 1/1/20-7/28/20. Of these collisions, 1,672 fatalities have been reported and another 109,328 people have suffered injuries. The month of January saw the highest number of traffic accidents with 32,548 total crashes and April had the lowest number of crashes with 16,416.

The National Transportation Safety Board (NTSB) did a study where they compiled all the data from wrong way driving crashes to identify trends in these deadly crashes. The following highlight their discoveries:

If you have survived a wrong way driving crash, then our Florida Auto Accident Attorneys at Whittel & Melton are here to help you file a claim with the at-fault driver’s insurance provider. Our goal is to make sure you receive the medical attention you need for your injuries and recover the full and fair compensation to which you are owed for your pain and suffering.

When you are hit by a wrong way driver, this is not only terrifying but can change your life forever in the blink of an eye. You can experience serious financial and non-economic losses, which you should be fairly compensated for. We want to help you exercise your legal rights. Dealing with the insurance companies involved can be a complex matter, which is where we can come in and negotiate on your behalf. We will assess the full scope of your injuries and damages to get you a fair settlement through negotiations, or by taking this matter to court.