South Florida’s waterways make beautiful scenery, but they are dangerous. With so many waterways that do not have barriers to keep cars from sliding or crashing into them, canal crashes can easily become fatal.

These crashes are more common than you may think. On Sept. 18, a 78-year-old man was rescued after his Honda minivan sank in a Florida City development’s pond. The water seeped inside and up to his chest.

According to reports, officers could hear the driver’s screams for help, and had to break the van’s windows in order to rescue him because the doors wouldn’t open. The driver was rescued and later safely reunited with his family.

During 2011, there were an estimated 213 people killed and 460 injured in “immersion crashes,”according to the National Highway Traffic Safety Administration. 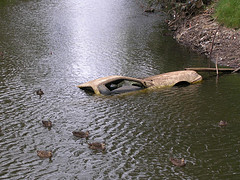 With so many deaths and fatalities, it is important to address the safety precautions that Florida drivers can take to save their lives and the lives of their passengers. For around $8, you can purchase the tools needed – a window punch and a seatbelt cutter – to help in the event of a canal crash.

The punch typically looks like a metal pen with a long point that is spring loaded. When aimed at the corner of a window that refuses to budge, it will crack it, which can let everyone in the car get out safely. People of all ages can use this tool in emergency situations.

When a car enters a waterway, it can float for just a few seconds or to up to three minutes, before it sinks. If the water is more than 14 feet deep, the car can even land on its roof.

The following tips are important for drivers to consider when it comes to surviving a water crash:

If you have been involved in a canal crash or a waterway accident, you could possibly have a claim against a number of parties. A South Florida Auto Accident Injury Lawyer at Whittel & Melton can help you understand your legal options. Call us today at 561-367-8777 or toll-free at 866-608-5529, or contact us online.