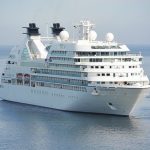 As countries are sealing off their borders to reduce the spread of the novel coronavirus, cruise ships have been left stranded in the Caribbean, South America and Europe, with local governments denying permission to disembark as more cases of infected passengers have come to light.

Some ships have been denied port, leaving them to anchor off the coast of a country. Other cruises have docked with quarantined passengers aboard.

Three cruise ships have confirmed cases of coronavirus on board: the MS Braemar, Silver Shadow and Silver Explorer.

Here is the status of the cruise ships stranded.

Status: In the Bahamas, heading towards Cuba

A cruise ship with confirmed coronavirus cases is headed to Cuba after days of searching for a place to dock after it was refused several ports of entry in the Caribbean.

Five people aboard the MS Braemar tested positive for the virus, according to a statement from British company Fred Olsen Cruise Lines, which owns the Braemar.

22 passengers and another 21 crew members, including a doctor, are in isolation after displaying influenza-like symptoms while traveling on the ship, Fred Olsen Cruise Lines said.

Until Tuesday morning, the Braemar was anchored about 25 miles offshore in the Bahamas, being resupplied with vital food, fuel and medication.

The United Kingdom entered into discussions with authorities in Cuba and the US to find a suitable port for the Braemar, according to British government sources familiar with the efforts.

Cuba said it will receive the ship. Braemar is now en route to the port of Mariel. The captain Jozo Glavic announced on board that all guests will be repatriated back to the UK by air.

The cruise line said those who are infected will have their own plane.

The cruise line is working with the British Foreign and Commonwealth Office to firm up details, and with Public Health England to confirm further requirements once passengers are back in the UK.

Fred Olsen’s UK office has set up a dedicated Braemar Relative Support team, for those anxious about family members on board.

Fred Olsen Cruise Lines said that once all ships currently at sea return home, the “cruise operation will then pause all ocean cruise operations until 23rd May.”

The British Foreign and Commonwealth Office expressed gratitude to the Cuban authorities for their support.

A Canadian passenger tested positive for coronavirus Saturday on the Silver Shadow, which is docked off the port of Recife in Brazil, according to Brazil’s state news agency Agencia Brasil.

Royal Caribbean confirmed the case on the Silver Shadow on Sunday.

“Two guests aboard the Silver Shadow have been medically disembarked in Recife, Brazil, and one has tested positive for COVID-19,” Royal Caribbean said in a statement.

The ship’s 609 passengers have been in isolation since Thursday when a passenger showed symptoms similar to coronavirus, Agencia Brasil said on Friday.

One of the passengers who disembarked, a 78-year-old man from Canada, had a fever, cough and difficulty breathing. He was sent to a private hospital in the city.

The Silver Explorer docked in Castro, Chile, on Saturday after a passenger tested positive for coronavirus, Chile’s Health Minister Jaime Manalich said during a press conference in Santiago Saturday.

An 83-year-old British man is in “good condition” and being treated at the Coyhaique Hospital after testing positive, Manalich said. Royal Caribbean, which owns the Silver Explorer, confirmed the coronavirus case on Sunday.

“One guest aboard the Silver Explorer has been medically disembarked in Castro, Chile, also testing positive for the virus,” the statement said.

The cruise ship is carrying 111 passengers and 120 crew members, according to Chilean officials.

While no one has tested positive for coronavirus on the Golden Princess anchored off New Zealand, at least three passengers have been quarantined by the ship’s doctor, according to local health officials.

One passenger developed symptoms similar to coronavirus and was being treated as a suspected case, according to the Canterbury District Health Board. Two other passengers had contact with a confirmed case in the past two weeks.

The ship is anchored in Akaroa Harbor near Christchurch so there could be “precautionary health testing” of guests who traveled on an international flight from Los Angeles. The flight had a passenger who later tested positive for coronavirus in Australia. The cruise line said the airline passenger who tested positive has never been on board its ship.

The passenger with respiratory symptoms tested negative for coronavirus. The Golden Princess was cleared to leave and set sail for Australia.

Status: Stranded in the South Pacific Ocean, no cases reported

The Norwegian Jewel is searching for a port in the Pacific Ocean after being denied permission to dock at two previously scheduled ports, Norwegian Cruise Line said.

The ship is at sea in the South Pacific Ocean off the coast of Suva, Fiji, as of Sunday evening.

The cruise was scheduled to disembark Sunday in Papeete, French Polynesia, but the port was canceled, the company said. Another scheduled port of Lautoka, Fiji, on March 17 was also canceled.

“We are actively working to find an alternative port and are communicating with guests regularly as we have further information,” the cruise line said in a statement.

Norwegian Cruise Line announced suspension of services from March 13 – April 11. “Voyages that are underway will conclude and guests will be disembarked as soon as possible and assisted with travel arrangements,” said the cruise line in a statement

Status: At sea in the Indian Ocean, heading to Fremantle, Australia, but docking rights uncertain

Pacific Princess, owned by Princess Cruises, departed in January for its 111 day around the world voyage.

Stopovers at Bali, Singapore and Phuket were canceled, due to fears over coronavirus.

The Pacific Princess was later refused entry by Sri Lanka while en route.

The ship was refused at the Seychelles, and abandoned its subsequent trek to Zanzibar, as more ports started to close.

The ship is currently heading to Fremantle, Australia, due to arrive March 21.

But Australia has closed ports to cruise ships, so this destination remains uncertain.

Two guests on board this ship, one German and one Danish, tested positive for coronavirus, according to Costa Cruises.

These passengers were placed in isolation after displaying symptoms, and later disembarked in Puerto Rico on March 8, where they were hospitalized.

“A third guest was also disembarked after being identified through the temperature check that is performed on board according to protocol,” said Costa Cruises in a statement.

The cruise company said it has suspended operations until April 3, and Luminosa is currently heading towards Marseille, France.

Costa Cruises confirmed that a 68-year-old male passenger with a history of cardiac issues contracted coronavirus. He was disembarked in Grand Cayman, the largest of the Cayman Islands, on February 29. The passenger later passed away.

The Cayman Islands government press release dated March 14 states the patient had two cardiac arrests while on board the cruise ship and was resuscitated, before he passed away in intensive care on Grand Cayman.

Families of those on Luminosa have been active on social media, expressing their frustration.

The Celebrity Eclipse is anchored in San Antonio, Chile. Celebrity Cruises is working with government officials to provide a controlled disembarkation plan to make sure guests have a way to leave the country, a spokesperson said.

The Azamara Pursuit, which is off the coast of Chile, is working on a plan to disembark passengers and get them home safely. The ship left Ushuaia, Argentina, on March 8 carrying 675 passengers and 389 crew members, Chile’s Health Minister Jaime Manalich said Saturday.

P&O Cruises announced suspension of any new cruises until April 11, 2020, with current cruises currently heading back to Southampton, England.

Whether you were a passenger or a crew member who has been diagnosed with coronavirus, we strongly encourage you to speak with our Florida Cruise Ship Injury and Maritime Law Attorneys at Whittel & Melton as soon as possible about your legal rights. You may be entitled to financial compensation, and we stand ready to help assess your potential case and determine if you have a valid claim.

To learn more about whether you could be entitled to financial compensation, you can contact us today to arrange a free initial consultation. We can speak with you anywhere in the world. We will happily answer all of your questions, explain your legal rights, and then help you decide if filing a lawsuit is the best way to proceed.