Leesburg City Commissioner Jay Hurley failed to convince a Lake County judge Wednesday morning that he made a wide turn and not an improper lane change that caused a crash that resulted in a biker’s death earlier this year, which lead to his driver’s license being suspended for six months and a $1,000 fine.

The one-hour hearing took place Wednesday morning and included testimony from Hurley, Leesburg police and witnesses as friends and family members of the victim.

The crash happened April 27 in front of Gator Harley-Davidson on U.S. Highway 441 during the last day of Leesburg Bikefest. According to police statements, Hurley was driving his Ford F-150 east on U.S. Highway 441 in the center lane and was preparing to turn into the motorcycle shop, which is on the south side of the highway.

The deceased was riding his 1987 Yamaha behind Hurley, but was in the right lane. 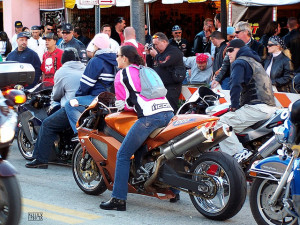 According to police evidence, Hurley made a right turn from the center lane into the dealership and drove into the path of the Yamaha, causing the deceased to crash head first into the truck.

After two weeks in a coma, the deceased passed away at Orlando Regional Medical Center.

After the accident, Hurley received citations for improper window tint and improper lane change resulting in death. The State Attorney’s Office recently cleared Hurley of any criminal charges from the accident.

At the hearing Wednesday morning, Hurley pleaded not guilty and stated that he was in the right lane but, due to the size of his four-door truck, he had to make a wide turn into the center lane in order to turn right into the business.

Leesburg police showed video and pictures of the crash site that displayed the truck at an 80-degree angle at the turn, with the bike pinned underneath. Police argued that it would have been impossible for the truck to have crashed at that angle if it had been turning from the right lane, even if a wide turn was the problem. Police even reconstructed the accident with similar vehicles to prove their case.

The judge found Hurley guilty, despite the fact that Hurley’s defense lawyer pointed out that police found no evidence of the bike braking and asked the judge to ignore the reconstruction video as well as a taped police interview of Hurley.

While no criminal charges will be filed against Hurley, the family of the deceased can still file a civil suit against the man, contending negligence. In these types of cases, financial compensation may be awarded for lost wages and benefits, loss of companionship and any emotional pain and suffering that is caused by the death. In order to recover these damages, it must be shown that specific actions were responsible for the death, and that the death would not have occurred without those actions.

If you have lost someone in a motorcycle accident, a Florida Motorcycle Accident Lawyer at Whittel & Melton can help you obtain the just compensation you are entitled to. Call us today for a free consultation at 352-369-5334 or toll-free at 866-608-5529.