A Virginia mother has filed a $1 million lawsuit against Trimper’s Rides and Amusements in Ocean City alleging that a ride left her 2-year-old son with a traumatic brain injury.

The woman filed the personal injury claim in U.S. District Court on July 23, and according to the court filing, her son and his young cousins were on the Hampton I, a ride geared toward children that features miniature trucks and cars that travel in a circle, when an operator stopped the ride to let another child off.

However, when the ride came to an abrupt stop, the woman’s son thought the ride was finished and exited his car. But, according to the complaint, the operator started the ride back up and one of the cars hit her son, knocking him down and “fracturing his skull on the cement floor.” 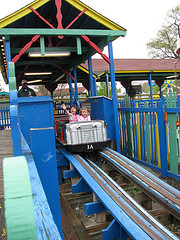 The lawsuit alleges the boy, who was 2 at the time, was “slammed into the floor and crushed between the ride’s tracks and the vehicle which had impacted him, as the vehicle continued along the tracks.”

Since the accident in June 2012, the lawsuit claims that the woman’s son has had significant medical expenses and suffered continued daily ill effects from his injuries.

The woman has accused the ride operator of being negligent due to the fact that he failed to secure all passengers and to check that the tracks were clear before resuming the ride.

Generally, in order to prove a negligence claim, it must be demonstrated that the defendant had an obligation to act in a responsible manner and with reasonable care in a specific situation and that the result of the defendant ignoring that duty caused an injury. This lawsuit alleges that the ride operator committed negligence because the ride was restarted before a sweep was done to make sure all children were secured in their seats and that the tracks were clear.

For this specific case, the operator of the ride would likely be found to have a duty to operate the ride in a reasonably safe manner. Any negligence found on the part of the individual operator could also lead to legal liability for the park’s owners as well since employers can be held responsible for negligent, careless or reckless acts committed by employees during the course of employment.

The two most common defenses to negligence claims are assumption of risk, where it is believed that the situation was so inherently or obviously dangerous that the injury victim should have known there were hazards and took the chance that he or she could be injured, and when a person acts carelessly and causes his own injuries. Although, these defenses could be difficult to prove due to the fact that the injured party is a  2-year-old child.

If you or a loved one has been injured at an amusement park, an Amusement & Theme Park Lawyer at Whittel & Melton can best advise you of your legal options. We can review your case and injuries free of charge and work to recover maximum compensation for your losses. Please call us today at 866-608-5529 or contact us online to learn more about how we can assist you with a legal claim for your injuries from any Florida amusement park.