The two passengers were taken to Jackson Memorial Hospital where they were listed as in “stable” condition. There was apparently a third passenger in the helicopter who was not harmed.

The helicopter crash happened just after 1 p.m. Saturday afternoon. The helicopter landed in the Atlantic Ocean near 10th street in Miami Beach.

The Federal Aviation Administration (FAA) did arrive at the crash site and closed off a two-block stretch of roadway between ninth and 11th streets, according to police. 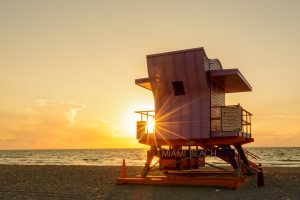 Helicopters are used for a variety of different reasons, like medical transport, tourism, military purposes, search and rescue, construction purposes, agriculture purposes, news and media purposes, police purposes, aerial observation, and more. Regardless of the purposes for using a helicopter, this mode of transportation can be quite dangerous as helicopters are complex aircrafts that have many different components and systems that are manufactured by multiple companies.

There are many factors that can lead to a helicopter crash, such as:

Helicopter accidents involve their own set of complex legal issues, so you need an experienced aviation accident lawyer who understands how to go about investigating these crashes. These investigations often involve helicopter crash experts, aviation engineers, and other expert investigators to uncover the facts about a crash so that your lawyer can assess the legal issues involved. These crashes often involve personal injury claims, wrongful death claims, and product liability claims, or any combination of these. When you consult with our Florida Aviation Injury Lawyers at Whittel & Melton we can launch an immediate investigation into a helicopter crash and piece together a full legal analysis of the accident so that we can prepare the strongest legal arguments to best support your claim. END_OF_DOCUMENT_TOKEN_TO_BE_REPLACED

A Roman Catholic priest in Florida is facing charges that he drugged a female parishioner and raped her.

The man was in a Miami-Dade County jail late Saturday charged with sexual battery on an incapacitated victim.

According to reports, in October, the 64-year-old priest invited the victim to his home at Sacred Heart Catholic Church in Homestead. The woman said she drank tea he gave her and passed out. She told investigators she woke up two hours later naked in the man’s bed, believing she was raped.

She did not notify police until two weeks ago after telling another priest. The Miami Archdiocese says she was told to contact authorities. Officers say the man confessed when confronted.

Priests are religious figures that you believe you can trust. However, when they violate that trust, the long-lasting effects on the victim can be devastating. They can range from depression and sleeping disorders to self-harm, suicide, and substance abuse.

If you are a survivor of clergy abuse, you have the right to seek compensation for your losses. You may receive damages for medical and therapy bills and loss of income. You may also be able to recover punitive damages, which are designed to punish the individuals and the institutions that allowed these acts of abuse to occur.

END_OF_DOCUMENT_TOKEN_TO_BE_REPLACED

Miami-Dade police say the officer was patrolling an area near a canal Wednesday afternoon when he hit a tree.

He was following up on nuisance and theft complaints by residents. Police say the officer had been called to an enforcement action just before the crash.

Police are still investigating the crash.

If you’ve been injured or lost a loved one in an ATV accident, you may be entitled to financial compensation for your pain and suffering. ATV accidents can result in serious injuries, even death, as this case shows. Our South Florida ATV Accident Attorneys at Whittel & Melton can help you receive the compensation that you deserve for ATV accident injuries and death.

ATV crashes can deliver serious injuries that may affect you for the rest of your life. Without the protection offered by cars, ATV drivers and passengers are more likely to suffer from life-threatening injuries. This is especially true because ATVs are highly prone to rollovers. We commonly see the following injuries from ATV accidents:

END_OF_DOCUMENT_TOKEN_TO_BE_REPLACED

Miami Beach’s Catalina Hotel, the scene of the 2012 CW network reality series “The Catalina,” has been slapped with twin lawsuits brought by two female tourists who allege the resort’s manager escorted one of them to their room then sexually abused them both.

The incident, according to the lawsuits filed in Miami-Dade County circuit court, allegedly took place a year ago. The women are only identified in court files as Jane Doe 1 and Jane Doe 2.

With prices in the $200 range and an open bar nightly from 7 to 8 p.m., the Catalina has become popular with spring breakers.

The hotel manager is accused of escorting Jane Doe 2 back to her room after she and roommate Jane Doe 1 “consumed several alcoholic drinks” during the complimentary hour.

When they arrived to the room, Jane Doe 1 was asleep on her bed.

Hotel property owners have a duty to provide a safe place for guests and patrons to visit. Unfortunately, sexual abuse and other crimes can happen on hotel property, and when an assault or act of violence occurs because of unsafe conditions, the property owner may face a hotel liability lawsuit.

Failure to maintain a hotel property in a safe condition that is free from dangers entitles the injured party or victim to file a premises liability claim for negligence against the hotel. A premises liability claim is a type of personal injury claim that allows the victim to seek financial compensation for medical expenses, pain and suffering, lost wages and various other damages.

END_OF_DOCUMENT_TOKEN_TO_BE_REPLACED

Drivers should anticipate an increase in motorcycle traffic on Florida roads, as thousands of motorcyclists ride into Daytona for the 76th annual Daytona Bike Week March 10-19.

With that said, Florida has the most motorcycle crash fatalities in the nation, according to the National Highway Traffic Safety Administration.

According to the most recent crash data, Florida saw a 30 percent increase in motorcycle deaths in 2015, the highest on record. Motorcyclists accounted for 20 percent of motor vehicle fatalities in the state, yet motorcycles account for only 3 percent of registered vehicles. In 2015, 606 people died and 9,045 were injured in motorcycle crashes on Florida roads.

The top counties for motorcycle fatalities are:

END_OF_DOCUMENT_TOKEN_TO_BE_REPLACED

A cruise ship passenger alleges he was injured after he slipped and fell near the food court on the ship.

The man filed a suit on Feb. 16 in the U.S. District Court for the Southern District of Florida against Celebrity Cruises Inc. alleging negligence.

According to the complaint, the man alleges that on Nov. 9, 2015, while aboard the cruise ship, he slipped and fell while walking on a slippery area near the food court. As a result, he alleges he suffered pain, loss of earnings and incurred medical expenses.

The man holds Celebrity Cruises Inc. responsible because they failed to conduct routine inspections of the area, failed to warn passengers of wet or contaminated floor surface and failed to establish, implement and enforce policies and procedures regarding the proper maintenance of the area.

Our Florida Cruise Ship Injury Lawyers at Whittel & Melton know that slip, trip and falls suffered aboard a cruise ship can leave you in great pain and unable to go back to work to earn a living. These cases can be complex, which is why you need knowledgeable representation to go up against the cruise ship industry.

END_OF_DOCUMENT_TOKEN_TO_BE_REPLACED

A Kentucky woman claims a slippery deck near a hot tub on a Miami-based cruise ship caused her to fall.

If you were injured in a cruise ship accident, you are not alone. Countless cruise ship passengers are injured every year, usually do to the negligence of a cruise line or its employees. Sadly, most of these injuries are 100 percent preventable. Slip, trip and fall accidents make up the majority of these incidents, resulting in a plethora of injuries including head injuries, broken bones, and spinal cord injuries. In most cruise ship slip, trip and fall cases, financial compensation can be sought by filing a personal injury claim.

While there are numerous ways a slip, trip and fall accident can occur, negligence is usually a contributing factor. The key to gaining a successful outcome for your claim, is proving negligence and showing that the negligence caused injuries to the victim.

END_OF_DOCUMENT_TOKEN_TO_BE_REPLACED

A Carnival passenger alleges he was injured because he slipped on a deck that was wet with rain.

The man filed a complaint on Jan. 23 in the U.S. District Court for the Southern District of Florida against Carnival Corp. alleging negligence.

According to the lawsuit, the man alleges that he sustained physical injuries when he accidentally slipped and fell due to a deck wet because of rain. The man holds Carnival Corp. responsible because they failed to warn the man of the hazardous condition of the lido deck.

All areas on a cruise ship that see a high volume of foot traffic must be must be free of dangers, and that includes any wet or slick surfaces that could result in slip, trip or fall injuries. Cruise line companies could be responsible for slip, trip and fall accidents that occur because of hazards employees create. Dangerous or hazardous conditions include slick or slippery surfaces and a failure to warn passengers of the wet area or failing to undertake reasonable safety precautions.

If a cruise line creates a dangerous condition or does not work to remedy the situation in a reasonable amount of time, they could be liable for all injuries they have caused. This negligence on the cruise ship’s part could mean you are entitled to recover financial compensation for your injuries.

END_OF_DOCUMENT_TOKEN_TO_BE_REPLACED

A lawsuit has been filed by 18 passengers who were aboard an American Airlines aircraft that caught fire last month on the tarmac of Chicago’s O’Hare International Airport after an engine failed.

The lawsuit claims GE sold a faulty engine that Chicago-based Boeing used to assemble an unsafe aircraft. The passengers also claim American Airlines employees should have done a better job inspecting the plane. They allege employees failed to provide “assistance, supervision and instruction” during evacuation.

On Oct. 28, pilots aborted the takeoff of American Airlines Flight 383 to Miami. All 161 passengers and nine crew were safely evacuated, with 20 people suffering minor injuries.

Engine failure is one of the most potentially catastrophic aircraft defects that can happen. Once an engine stall after a flight has taken off, the results are usually tragic. Engine failure can arise from many things, including:

END_OF_DOCUMENT_TOKEN_TO_BE_REPLACED

Dozens of people have fallen ill after a carbon monoxide leak at a Miami office building.

According to Miami-Dade Fire Rescue, high levels of carbon monoxide were found on the second floor Monday afternoon.

At least 17 people were taken to hospitals, while dozens more were treated at the scene and released.

About 80 people were sent home because they felt sick. Approximately 400 people work at the building.

Officials say the source of the leak came from the drains in the first floor bathrooms.

Reports indicate that an environmental assessment company has been contacted to ensure necessary repairs are made.

Carbon monoxide is a colorless, odorless gas by-product that interferes with the delivery of oxygen in the blood to the rest of the body. It is often referred to as the “silent killer.” This type of toxic exposure usually results in physical problems, neurological problems, and even death.

Symptoms of carbon monoxide poisoning are often confused with the flu or food poisoning. Depending on the amount inhaled, this gas can cause: